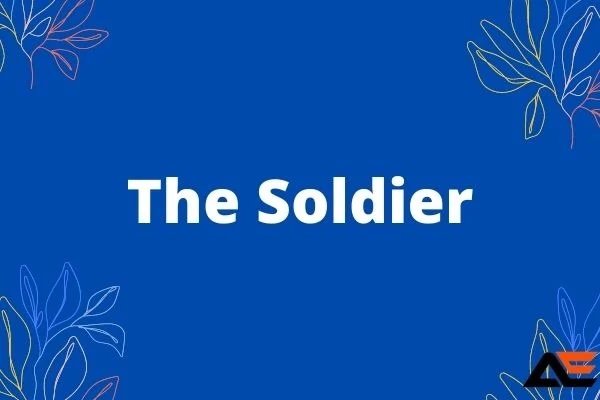 The Soldier Rupert Brooke was an English poet. He is well known for his idealistic war sonnets written during the First World War, especially ‘The Soldier’.  He was also known for his boyish good looks, which were said to have prompted the Irish poet W. B. Yeats to describe him as “the handsomest young man in England”.

If I should die, think only this of me:
That there’s some corner of a foreign field
That is for ever England. There shall be
In that rich earth a richer dust concealed;
A dust whom England bore, shaped, made aware,
Gave, once, her flowers to love, her ways to roam;
A body of England’s, breathing English air,
Washed by the rivers, blest by suns of home.

And think, this heart, all evil shed away,
A pulse in the eternal mind, no less
Gives somewhere back the thoughts by England given;
Her sights and sounds; dreams happy as her day;
And laughter, learnt of friends; and gentleness,
In hearts at peace, under an English heaven.

Summary In English The Soldier

“The soldier” is a patriotic type of sonnet composed by Rupert Brooke who was a great war poet. The poem was a soldier’s love for his motherland. The poem inspires us to love our mother land from the core of our heart. For a soldier, his motherland is more important than anything else.

In this sonnet, the poet expresses his deep feelings for such a situation. If he dies in a foreign land fighting a battle, his body will be buried there. Even in death, his body will continue to be England’s.

The poet remembers the flowers, the ways ,the air, the rivers and the suns of home and tells us how his body was given to him by his native land, England. The soldier was born there and also grew up there.

In the second stanza, there is a shift in ideas. From the body in the first stanza, the soldier new goes to talk of thoughts. The thoughts are actually the qualities of mind like dreams, laughter and gentleness given by England.

These are England’s gifts. In death, the soldier will be a part of the eternal mind. People will acknowledge him as the son of England. Thus, it is out and out a patriotic poem.

Question and answer The Soldier

1. How can some corner of a foreign field be forever England ?
Answer : The poet says that his body is the rich dust of England because he is born and brought up in England so wherever his body is buried it will be of England forever.

3. How would the poet in the soldier like to be remembered if he dies in the battle ?
Answer : The poet would like to be remembered as the man who was born and brought up in England and who loved his country and Countrymen from his heart and soul. The place where he is buried after his death should be treated as the part of England .

4. ‘In that rich Earth a richer dust concealed’ what does the dust stand for ?
Answer : The dust stands for the body of the poet that is purely born and brought up in England.

1. Who has written the poem The Soldier
A. William Wordsworth
B. John Donne
C. John Keats
D. Rupert Brooke

2. The poem…… is a patriotic poem.
A. song of myself
B. the soldier
C. an epitaph
D. fire-hymn

8. The place where the soldier would be buried , it should be treated as the part of……. after his death.
A. France
B. America
C. India
D. English

11. ‘A pulse in the eternal mind, no less’ is written by….
A. John Keats
B. John Donne
C. Rupert Brooke
D. Walt Whitman