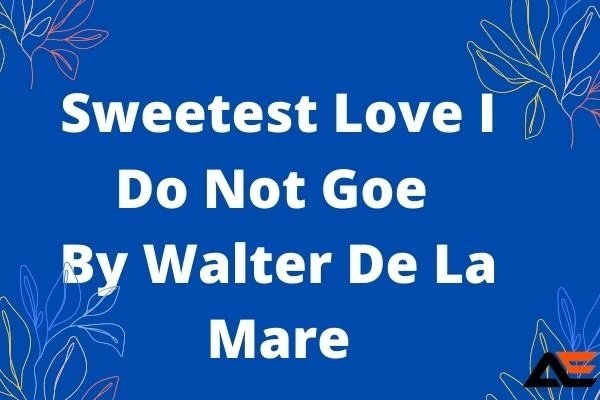 Sweetest Love I Do Not Goe Summary of the poem

The poem “Sweetest Love I Do Not Goe” is a beautiful love song about destiny and fate written by John done for his wife. He consoles his beloved by saying that he is going abroad not because he is fed up with her or he hopes to choose a better beloved.

The poet assures her that this temporary parting is actually a rehearsal of the final parting that comes with death. It is death, which separates us from the madding crowd of people. So it is not good for her to shed tears. Actually, her weeping will weaken not only him but also her. He assures her that he will soon come back to her speedier than the sun because he loves her from the core of his heart.

He again says that she is his heart beating. If something bad happens to her, he will fail to bear it. He again tells her that true love dwells in the souls of lovers. Even death can’t separate them from each other. True love is above death. Thus, it is one of the best love poems composed in traditional language and lucid style.

Question Answer Sweetest Love I Do Not Goe

2.What are the things that Sun does not have ?
Ans : The sun has no desire or motive to return quickly because it has no any beloved.

5. How do sigh and weeping affect the speaker ?
Ans : When the speaker’s beloved sighs , she dries up his soul. When she weeps she decays his blood.

7.In what way will the lovers remain untied ?
Ans : According to the poet those who love each-other can never be separated . They live in each-other and remain ever untied.

8. Explain :
But believe that I shall make
Speedier Journeys , since I take
More wings and spurres than hee.

Explanation : These lines have been taken from the poem ‘Sweetest love I do not Goe’ written by John Donne. Through these lines the poet promises to his wife that he will return more quickly than the sun because he loves her intensely and this love will make him to get back home .

He will fly back on the wings of love but the sun has no lover so he is in no haste to return . Such is the power of love that spurs the lover to make haste to meet his beloved without rest.

9. Explain
They would love one another keepe
Alive , ne’r parted bee .
Explanation : The poet wants to say that the lovers live in one-another . Their souls are untied so they can never be parted. They may only look separated physically but they are never separated spiritually . They live in each-other’s heart perpetually.

10.What argument does the poet give at the time of parting with his beloved ?
Ans : The poet tell his wife not to to cry at the time of his going abroad. He assures her that he loves her so passionately that he will come back soon and tells her not to sigh and weep because that may really endanger his life during his voyage.

He says that her sigh will anticipate the wind on the high seas. Her tears will cause a storm . He tells her that she does not love him as she says she does if she wastes his life in her love.

Objective Question Sweetest love I do not Goe

21. John donne was Consoling his wife before going to the……………..
A. Mountain B. Forest C. Himalayas D. Voyage