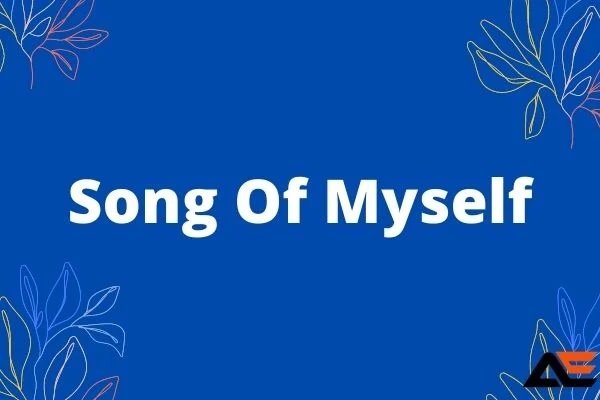 Song Of Myself Summary of the poem :

” Song of Myself” is an inspiring poem composed by Walt Whitman, a great American poet. It has been taken from a collection of his poems, “Leaves of Grass”

Here, the poet celebrates the glory and greatness of the whole humanity through his own philosophy of life. He openly celebrates himself and sings himself and sees himself in others. He knows that the basic constituent of human beings remains the same.

And moves as he wishes and watches a spear of summer grass. He says that his life has been shaped by this soil and air and fondly remembers the contributions of Nature to mankind. He does not believe in any creed and class and opines that there should be no difference between man and man.

To his mind, all the creations of this universe are one. He loves both the old and the young and wishes to remain healthy and active as long as he is alive. He wishes that nature should continue pouring her blessing on him.

In this way, he celebrates the unity and brotherhood of the entire humanity by singing his own ‘self’. He is bent upon expressing himself without any check and with original energy.

Question Answer Song Of Myself

4.What is meant by nature without check with original energy ?
Answer :The poet is not influenced by the thought and dogmas of others. He wants to speak in his original form and with full force like this nature without any discrimination.

6.How does the speaker establish relation between ‘me’ and ‘you’ ?
Answer : The speaker establishes a complete identity between himself and others by saying every atom belonging to me as good belongs to you. Me and you are the two sides of the same coin.

7.What does you observe in summer?
Answer : He observes every single blade of grass in summer.

8.What has formed the speakers blood
Answer : The soul on which he rests and the air that he breathes have formed his blood.

9.What does he hope to do?
Answer : He hopes to concentrate on nature for inspiration of his songs.

10.What does he want to do with creeds ?
Answer : He wants to keep them aside for some time though he does not want to forget them all together.

12.What similarities does the poet draw between two human beings ?
Answer : The poet draws physical and mental identity between two persons he asserts that each human being is made of the same atoms of the earth and air as he himself or as any other human being.

13. Explain the line hoping to cease is not till death ?
Answer : The poet is 37 years old and he is in perfect health. He hopes he will stay healthy till the last day of his life.

15. What does the poet mean by nature without check with original energy ?
Answer : The poet wants to have direct communication with nature he wants to approach nature without any pre convinced ideas. So he does not want any creeds and schools to influence him and dilute his understanding of nature. He wants nature’s wisdom to come directly to him. He wants to experience nature that is original and has its full force.

Objective Question Song Of Myself