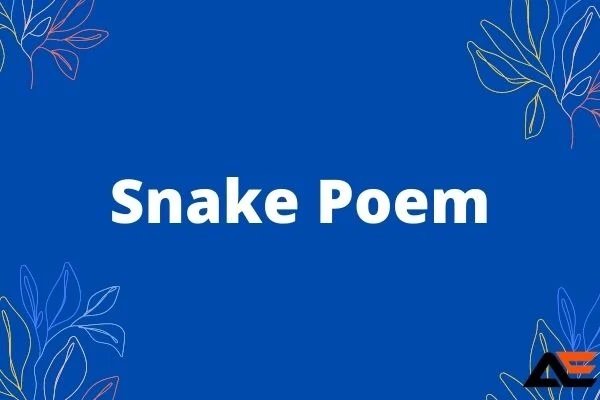 Born – September 11, 1885, Eastwood, Nottinghamshire, England   Snake
Died – March 2, 1930, Vence, France
English author of novels, short stories, poems, plays, essays, travel books, and letters.
His important works include – A Collection Of Poems, The White Peacock, The Trespasser, Plumed Serpent, Lady Chatterley’s Lover etc.
His novels Sons and Lovers (1913), The Rainbow (1915) and Women in Love (1920) made him one of the most influential English writers of the 20th century.

A snake came to my water-trough
On a hot, hot day, and I in pajamas for the heat,
To drink there.

In the deep, strange-scented shade of the great dark carob tree
I came down the steps with my pitcher
And must wait, must stand and wait, for there he was at the trough before me.

He reached down from a fissure in the earth-wall in the gloom
And trailed his yellow-brown slackness soft-bellied down, over the edge of the stone trough
And rested his throat upon the stone bottom,
And where the water had dripped from the tap, in a small clearness,

Someone was before me at my water-trough,
And I, like a second-comer, waiting.

He lifted his head from his drinking, as cattle do,
And looked at me vaguely, as drinking cattle do,
And flickered his two-forked tongue from his lips, and mused a moment,
And stooped and drank a little more,

Being earth-brown, earth-golden from the burning bowels of the earth
On the day of Sicilian July, with Etna smoking.

The voice of my education said to me
He must be killed,
For in Sicily the black, black snakes are innocent, the gold are venomous.
And voices in me said, If you were a man
You would take a stick and break him now, and finish him off.

But must I confess how I liked him,
How glad I was he had come like a guest in quiet, to drink at my water-troughAnd depart peaceful, pacified, and thankless,
Into the burning bowels of this earth?

Was it cowardice, that I dared not kill him?
Was it perversity, that I longed to talk to him?
Was it humility, to feel honoured?
I felt so honoured.

And yet those voices:
If you were not afraid you would kill him.
And truly I was afraid, I was most afraid,
But even so, honoured still more
That he should seek my hospitality
From out the dark door of the secret earth.

He drank enough
And lifted his head, dreamily, as one who has drunken,
And flickered his tongue like a forked night on the air, so black,
Seeming to lick his lips,
And looked around like a god, unseeing, into the air,
And slowly turned his head,
And slowly, very slowly, as if thrice a dream,
Proceeded to draw his slow length curving round
And climb again the broken bank of my wall-face.

And as he put his head into that dreadful hole,
And as he slowly drew up, snake-easing his shoulders, and entered further,
A sort of horror, a sort of protest against his withdrawing into that horrid black hole,
Deliberately going into the blackness, and slowly drawing himself after,
Overcame me now his back was turned.

I looked round, I put down my pitcher,
I picked up a clumsy log
And threw it at the water-trough with a clatter.
I think it did not hit him,
But suddenly that part of him that was left behind convulsed in undignified haste,
Writhed like lightning, and was gone
Into the black hole, the earth-lipped fissure in the wall-front,
At which, in the intense still noon, I stared with fascination.
And immediately I regretted it.

I thought how paltry, how vulgar, what a mean act!
I despised myself and the voices of my accursed human education.
And I thought of the albatross,
And I wished he would come back, my snake.

For he seemed to me again like a king,
Like a king in exile, uncrowned in the underworld,
Now due to be crowned again.

And so, I missed my chance with one of the lords
Of life.

And I have something to expiate:
A pettiness.

“Snake” is a beautiful poem composed by D.H. Lawrence who is a noted poet, novelist, essayist, short writer and letter-writer.

In this poem, the poet tells us how one hot day, he fell thirsty and got up to drink water. No sooner did he move forwards the tap then he found a snake coming out from the fissure of the earth. The poet was highly fascinated by the look and movement of the snake.

Instead of killing it, he began to watch its beautiful movement. It moved towards the tap and drank water. Then, it began to retire towards the hole. A conflict seized the mind of the poet whether to kill the snake or not. Reality speaking, the poet began to like it.

The poet was totally confused. Sometimes he considered himself a coward and sometimes an honorable being. Really, when the snake entered partly the hold, the poet tried to hit with a piece of log although.

He could not kill it, He was filled with remorse and considered his act a paltry vulgar and mean act. He cursed the human education that forced him to do that mean act.

4. How did the snake drink water?
Ans- The snake drank water with its straight gums silently. It sipped water by resting its throat upon the stone bottom where the water had dripped from the tap.

5. What is the meaning of ‘Sicilian July ‘ with Etna smoking?
Ans – It means extreme heat like when Etna smoking.

6. What is the belief prevailing in Sicily about a snake?
Ans- In Sicily, the black snake are innocent, but the golden snakes are venomous. The golden snakes must be killed.

9. What thing about the snake did appeal him most?
Ans- As the snake put his head into the hole to retreat into the earth, the poet was filled with a protest against its withdrawing into the hole. It’s going into the black hole appealed him most.

5.The snake looked at the poet…..
A. Happily
B. Rudely
C. Vaguely
D. Confusingly

6. ‘He lifted his head from his drinking, as cattle do’ is written by………
A. T S Eliot
B. DH Lawrence
C. Rupert Brooke
D. John Keats

7. The voice of education said to me he must be killed. These lines are taken from…….
A. The soldier
B. Snake
C. Fire hymn
D. An epitaph