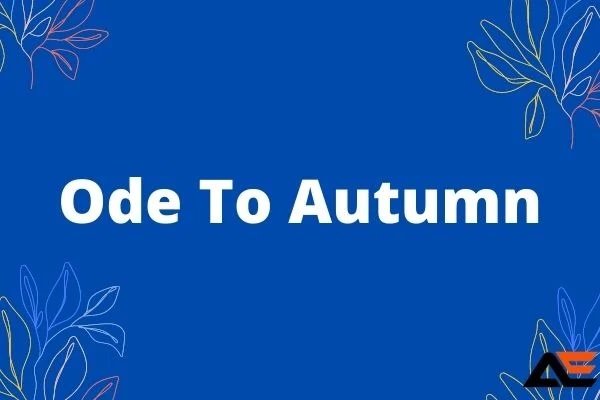 Ode To Autumn By John Keats

Studied At – Clark’s School at Enfield

Trained As – A surgeon

Summary Of “ODE TO AUTUMN”

‘To Autumn’ is an ode written by John Keats. In this poem, the poet addresses autumn like a person.  First stanza – he says that autumn and the sun are best friends who lead fruits and crops to grow, ripe and harvest.
Second stanza – He describes the period after the harvest, when autumn just hangs out around the granary where harvested grains are kept.

In the last stanza, the speaker notes that music of spring is a distant memory, but that autumn’s music is pretty cool, too. This music includes images of clouds and harvested fields at sunset, gnats flying around a river, lambs bleating, sights and sounds produce a veritable symphony of beauty.

Question and answer Ode To Autumn

2. What happens in autumn ?
Ans : All types of fruits and food grains grow and get ripeness In autumn.

5.How are autumn and summer related to spring?
Ans : Spring comes before summer and autumn comes after summer so both come before and after summer just as old and young age are related to adolescence.

6. What does the poet say about the music of of autumn ?
Ans : The poet says that autumn has its own music like spring. We can hear various types of sounds created by different birds and animals In this season. These sounds make our world very melodious and beautiful.

7. What do autumn and Spring symbolize in the poem?
Ans : Autumn and spring symbolize that this nature is full of various beautiful sounds and things. If we start enjoying them, they can give us very much pleasure and peace in our life.

4. Autumn starts with the departure of…….. season .
A. Winter
B. Spring
C. Summer
D. Rainy

6. ‘And gathering swallows twitter in the sky’ is taken from…….
A. snake
B. ode to autumn
C. the soldier
D. macavity

17. The theme of the poem ‘ode to autumn’ is ….
A. Maturity/ fulfillness
B. Love
C. Growth
D. Satisfaction

18. Who has been personified in the poem ode to autumn?
A. Winter
B. Summer
C. Spring
D. Autumn

20. autumn and sun are……..
A. enemies
B. competitors
C. bosom friends
D. brothers