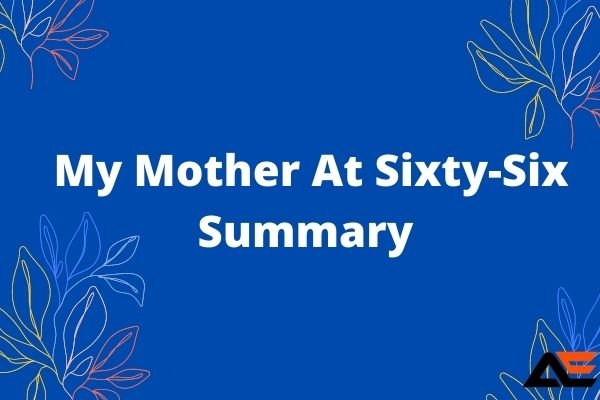 ” My Mother At Sixty Six ” By Kamala Das

Central theme of the Poem My Mother At Sixty Six

My Mother At Sixty Six Summary in English: The poet, Kamala Das (Kamala Surayya) had gone to visit her parents’ home. On Friday morning, she was returning. On her way to the airport, she saw her mother resting close to her in the car. Her mouth was open. Her face was pale and colourless, actually like a dead body. It may be due to the pain she felt on account of separation from her daughter.

The poet was frightened to know that old age crawled upon her mother. It was a reality she discovered hard to believe. The poet became very sad to see her mother like this. To remove her consideration from the upsetting idea , she looked outside the car. Since the car was moving, the youthful green trees gave off an impression of being running the other way. She likewise saw a gathering of children hurrying out of their homes to play.

Both of these were a token of the past. The youthful running trees addressed how quick time had flown by. The youngsters addressed youth, which was loaded with life and energy. Both the youthful trees and the kids present a sharp difference to the mother sitting close to her.

The little children and trees had removed her sad considerations away. But when she arrived at the airport and was going through security check, the poetess again sees her mother, who was standing a couple of yards from her. Her mom looked dead and dull like a winter’s(pre-spring’s) moon, which can’t be seen clearly due to fog and mist.

Indeed, she was tormented to her mom in this condition. When she was leaving her mom, her old familiar ache, her youth dread that she would lose her mom, abruptly woke up. However, she attempted to conceal her feelings behind her grin. She would not like to uncover her emotions to her mom and say goodbye to her cheerfully. She offered desire to her mom and herself by saying that they would meet again and continued grinning.

1. Why has the poet’s mom been contrasted with the ‘ late winter’s (pre-spring’s) moon’ ?

Why has the mother been compared to the ‘late winter’s moon’?

Ans .  A ‘ late winter’s (pre-spring’s moon)’ looks foggy and seems to need splendor and gloss because of fog and haze, in the same way, the poet’s mom, who is presently old, looks pale and without energy. Her face looks dull and boring because of old age.

2. What is the kind of pain and ache that the poet feels?

Ans . The artist is tormented to see her mom’s dull and dismal face. She is harmed to see that her mom’s face resembles that of a dead body. She fears the way that she may not see her alive next time.

3.Why has the poet brought in the image of the merry children ‘spilling out of their homes’?

Why are the young trees described as ‘sprinting’?

Ans . The writer has utilized this symbolism to draw out the difference between her mother who is old, pale and inactive. Whereas young trees are sprinting and the children who also are fiery and loaded with life.

4.What do the parting words of the poet and her smile signify?

Ans . The writer’s parting words, ‘See you soon, Amma’ , mean expectation and affirmation, not exclusively to her yet to her mom additionally, that they will meet once more.

5. Maturing is a characteristic interaction; have you at any point thought what our old parents anticipate from us ?

Ans . Our old parents as a rule go through aches of depression and need friendship. They long just for our adoration, care and consideration. They anticipate that their children should impart the happenings in their lives to them and take their ideas for settling on huge choices. This will urge them to carry on with life excitedly.

1. How does Kamala Das attempt to take care of the considerations of her maturing mother?

Ans. Kamala Das thinks that its difficult to acknowledge the reality of her mom developing old, as it takes back to her brain her youth dread of losing her mom. She puts forth a purposeful attempt to drive or take care of such considerations by looking external the vehicle at the sights cruising by.

2. What was the writer’s youth dread?

Ans. During her youth, Kamala Das was shaky about losing her mom similarly as all small kids regularly are. The old same sentiments cause issues down the road for her when she sees her mom’s pale and dead face. She is tormented by the way that she may not see her alive once more. She shrouds her emotions by grinning.

3. For what reason are the youthful trees depicted as ‘running’?

Ans. The vehicle was moving when the writer looked outside at tree s. They gave off an impression of being ‘running’ on the grounds that the vehicle was speeding past the other way. The ‘youthful’ trees addressed life rather than her mom’s moving toward death.