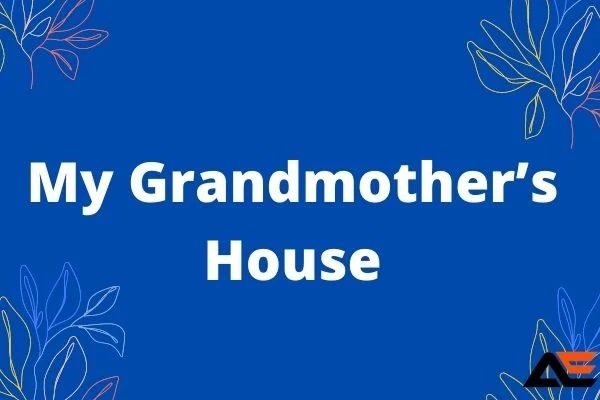 • She received many literary awards, including the Asian World Prize for Literature in 1985.

There is a house now far away where once
I received love……. That woman died,
The house withdrew into silence, snakes moved
Among books, I was then too young
To read, and my blood turned cold like the moon

How often I think of going
There, to peer through blind eyes of windows or
Just listen to the frozen air,
Or in wild despair, pick an armful of
Darkness to bring it here to lie
Behind my bedroom door like a brooding
Dog…you cannot believe, darling,
Can you, that I lived in such a house and
Was proud, and loved…. I who have lost
My way and beg now at strangers’ doors to
Receive love, at least in small change?

” My Grandmother’s House” is a lovely poem. It is an auto-biographical poem composed by Kamala Das who was an outstanding Indo-Anglian poetess.

In her poetry, we find a very free and frank expression to her personal experience of life. Here, She very madly remembers her grand-mother’s house where she had spent the sweet days of her childhood.

She says that the house is a symbol of innocent love which she used to get from her grandmother is dead. With her grandmother’s death, The house got deserted. Nobody lives in that house. Now she lives far away from that house. The place where she lives now is deprived of true love.

There is nothing but falsehood, cheating and faithlessness here. She is totally fed up with her way of life. That is way, she wants to go there and feel the presence of her grandmother in that silent house. After the dean of her grandmother. She is left with a sad feeling.

Here, we find a beautiful comparison between the innocent life of childhood and that of an adulthood.

3. Why did the house go into silence?
Ans- The house went into silence because the speaker’s grandmother had died. Her death became the cause of silence in the house.

6. During her childhood the speaker of ‘My Grandmother’s House’ lived with her –
(A) grandmother
(B) aunt
(C) mother
(D) None of house

8. The speaker of ‘My Grandmother’s House’ is proud of-
(A) her parent’s house
(B) her grandmother’s house
(C) her uncle’s house
(D) None of these

11. Kamala Das remembers the happy days spent in the sweet company of her
(A) grand mother
(B) grand father
(C) father
(D) mother

15. ‘My Grandmother’s House’ is an …………… poem by Kamala Das.
(A) Biographical
(B) Auto biographical
(C) Bibliographical
(D) None of these

16. When did the speaker of ‘My Grandmother’s House’ live with her grandmother ?
(A) during her childhood
(B) during her adolescence
(C) during her youth
(D) None of these