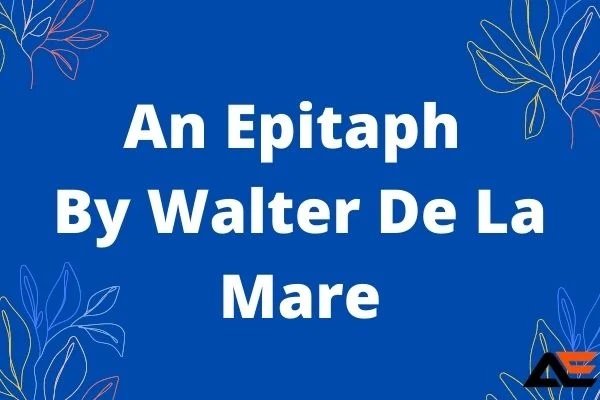 “An Epitaph” is a short poem composed in the memory of a very beautiful lady. It has been composed by Walter de la mare who is popularly known as a children’s poet. In his poetry. We find a world of wonder and mystery.

In this poem, the poet highlights the transistorization of human life and love. He says that beauty is a nine day’s wonder. It is transient. Love and beauty don’t last forever. Here, the poet talks about a very beautiful and charming lady. She was proud of her beauty.

The poet reminds us that beauty vanishes with the passage of time. It comes to decay and death. The poet again says that when she becomes old or dies, no one will remember her. Only true love is eternal. But it is a matter of sorrow that the lady lacks true love.

As long as a woman is alive. She may be loved. When she dies, No one will remember her, Beauty truly lies in the eye of a true beholder. The poem is short but pregnant with thoughts and truth. Words are laconic and its style is lucid.

1. What will happen when the poet dies ?
Answer : Nobody will ever remember the beautiful lady who is only alive in the hearts of the poet himself.

2. Write a note on the philosophical meaning of the poem.
Answer : According to the poet beauty is short lasting. It is perished by the passage of time. People make memorials or epitaphs on the graves of their love ones but this is significant only to those who remember them.

3.Where does the lady lie ?
Answer : The lady lies in her grave after her death and and an epitaph is made on her grave in her memory.

4. How does she look to the poet ?
Answer : She looks to the poet the most beautiful lady of the west country.

6. What does the poet think about the beauty ?
Answer : The poet thinks that beauty vanishes, It passes with the passage of time. It is not long lasting.

7. What does the poet mean when he says ‘And when I crumble’?
Answer : The poet means to say that after his death no one will remember that beautiful lady of the west country.

15. ‘And when I crumble, who will remember her’ is written by……
A. John Keats
B. Walter De La Mare
C. John donne
D. Rupert Brooke