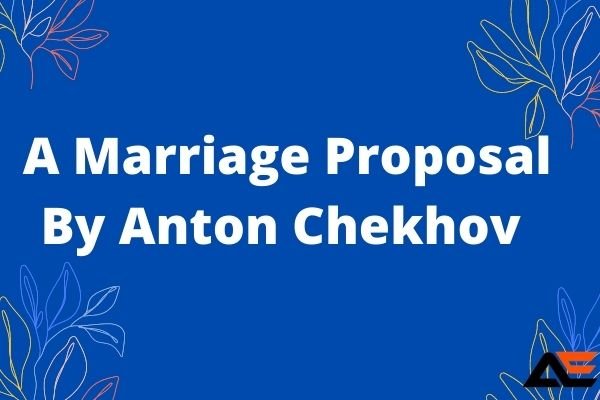 A Marriage Proposal By Anton Chekhov

Anton Chekhov (1860-1904), dramatist and short story writer of Russia, was a doctor by profession. A Marriage Proposal

He began his literary career by writing comic sketches.

He lived in Russia during the rule of the czars or emperors.

His works present an accurate picture of the Russia of his days.

They also explore the depths of human emotion.

Chekov introduced to the stage the realistic problems of common people.

His work often show a comic attitude towards the behavior expected from the elite of that time. Even his saddest plays contain human weaknesses.

Hence, they portray human life in a sensitive way.

He had a considerable influence on twentieth century drama.

George Bernard Shaw paid tribute to him in Heartbreak House (1919).

The present comedy ‘A marriage proposal’ presents characters who cause their own discomfort.

EXPLANATION IN ENGLISH A Marriage Proposal

Choobookov is an old landlord. He has a daughter Natalia who is twenty-five years old. She is unmarried. Choobookov is anxious to marry her off. Natalia too is eager to be married. It appears she is not good looking though she has some education, and is a good housekeeper.

Lomov is their neighbor. He too is a landlord and is thirty- five years old  bachelor. He is an easily excitable person and  suffers from a number of ailments. His heart palpitates, his temples
throb and his legs go numb.

Lomov is well-aware of his ailments. He realizes that he has reached a critical age. It was high time that he married. He needed to regulate his life and thinks Natalia will be a good wife. He cannot
expect to find anyone better than her.

Lomov and Natalia have a quarrel

Choobookov goes in and sends Natalia to Lomov. But he does not tell her that lomov wants to propose to her. Natalia is surprised to see lomov dressed in formal clothes. She wants to know why lomov is formally dressed. Lomov does not know how to begin.

He tells Natalia that they have been good and intimate neighbors. They are so close that his Ox meadows lie along their birch wood. Natalia immediately interrupts him. She tells him that the Oxmeadows belong to them, and not to him. But lomov sticks to his claim.

He says that the grandmother of his aunt had given grandfather because he made bricks of her. The peasants used the meadows free of rent for forty years. Then they began to consider them their own. But after a statute was passed, there is no longer a dispute.

They belong to him in the official record. This leads to a quarrel between lomov and Natalia, Natalia says that the meadows are worth only three hundred rubles. But she could not give up her claim over them. Lomov too says the same thing.

Natalia says she will send her men to mew the meadows. Lomov says that he will kick them out.

A Marriage Proposal By Anton Chekhov

Choobookov’s role in the quarrel

Choobookov hears them quarrelling. He comes there. Natalia asks him to tell lomov whom the meadows belong. Choobookov supports Natalia. He tells lomov that their peasants did not pay any
rent to his aunt’s grandmother because the meadows were disputed.

Lomov threatens to take the matter to court of law. Choobookov says he is a petty person who is always looking for an opportunity for litigation. They call each other names. Lomov is excited and nervous. His head is throbbing, his legs are paralyzed and his eyes are twitching.

He cries and shouts. Natalia and Choobookov go on relentlessly shouting at him. Lomov moves slowly to the door and goes out into the street.

Natalia is eager to marry lomov

When lomov has gone, Choobookov tells Natalia that he came to propose to her. This news was a shock to Natalia. She became hysterical and blames her father for not telling her this before. She also accuses him for causing a rift between them and asks him to bring lomov back.

Natalia is eager to marry him. She wants to accept him immediately Choobookov is in a fix. How can he call a man back whom they has insulted and abused? He is depressed and says he had better kill himself. But luckily for him shameless lomov comes back of his own. Choobookov leaves lomov and Natalia alone. He goes away into the house.

Natalia wishes lomov to propose to her immediately so that she may accept him. She speaks gently and cautiously to Lomov and even apologizes him and says that the meadows actually belong to him.
Natalia tries to change the topic. She asks him when he will go hunting.

Lomov tells Natalia that his best dog Guess has gone lame. He tells her that he had paid one hundred and twenty-five rubles for it. Natalia says he paid too much. Her father bought their leap only for eight-five rubles, and leap is a far better hound than Guess.

Now they begin to argue which of the two dogs is better. Lomov says that Guess is a worthless hunting dog because he has a lower shorter jaw than his upper jaw. But Natalia insists that Guess is better than leap because he is pedigreed hound whereas leap is a mongrel. Each of them asserts that their dog is better. Neither of them is willing to yield.

Choobookov appears again. Both Natalia and Lomov ask for his judgment as to which of the two dogs is better. Choobookov says that Guess is pure breed and has solid legs but he is old and his muzzle is too short.

Lomov’s heart begin to beat loudly again. He reminds Choobookov that when they were hunting in the Mapooskin Fields, Guess ran neck to neck with Count’s dogs but leap lagged far behind.
Choobookov says that leap lagged behind because Count’s assistant whipped him because he is envious of everyone’s good dog.

But Lomov asserts that leap was whipped because he was chasing sheep instead of the fox. This made Choobookov angry. He says it is a lie. They begin to call each other names. They find faults in each other and their families. Lomov is nervous.

His heart begins to palpitate. He is worse than ever. He drinks water. But Natalia and Choobookov continue to abuse him. Lomov too shouts on them. Lomov cries that his heart is sinking. He is dying. And he actually collapses. Choobookov too is sick.

Natalia and Lomov are married A Marriage Proposal

Natalia goes hysterical again. She believes her suitor is dead. Her chance to marry is lost. She shakes lomov. She wants a doctor to help him. Lomov begins to revive. Choobookov joins Natalia and Lomov’s hands. He tells lomov that she has accepted him.

He asks lomov to kiss her. Lomov kisses her. Natalia is happy. But they still are arguing that their dog better. Choobookov is happiest of them all. He feels relieved because his daughter is married of after all. He celebrates it with champagne.

9. What had Natalya been doing when Lomov called for her?
(A) cleaning the house
(B) washing clothes
(C) shelling peas
(D) cooking food

10. Why was Natalya arguing about the land?
(A) she couldn’t stand unfairness
(B) it was worth a lot
(C) she was jealous of Lomov
(D) All of the above

11. What do they argue about after holding each other’s hands?
(A) dogs
(B) land
(C) marriage venue
(D) the cuisine

13. What happens to Lomov when he is in an excited state?
(a) He started running
(b) His heart beat increases.
(c) His brain started working
(d) None of the Above

19. Lomov bought his dog from Mironov for …….rubles.
(A) a hundred and twenty
(B) two hundred
(C) three hundred
(D) two hundred fifty